The Luck of The Irish; The Rub Of The Green!

New Circle K survey reveals how lucky we really are 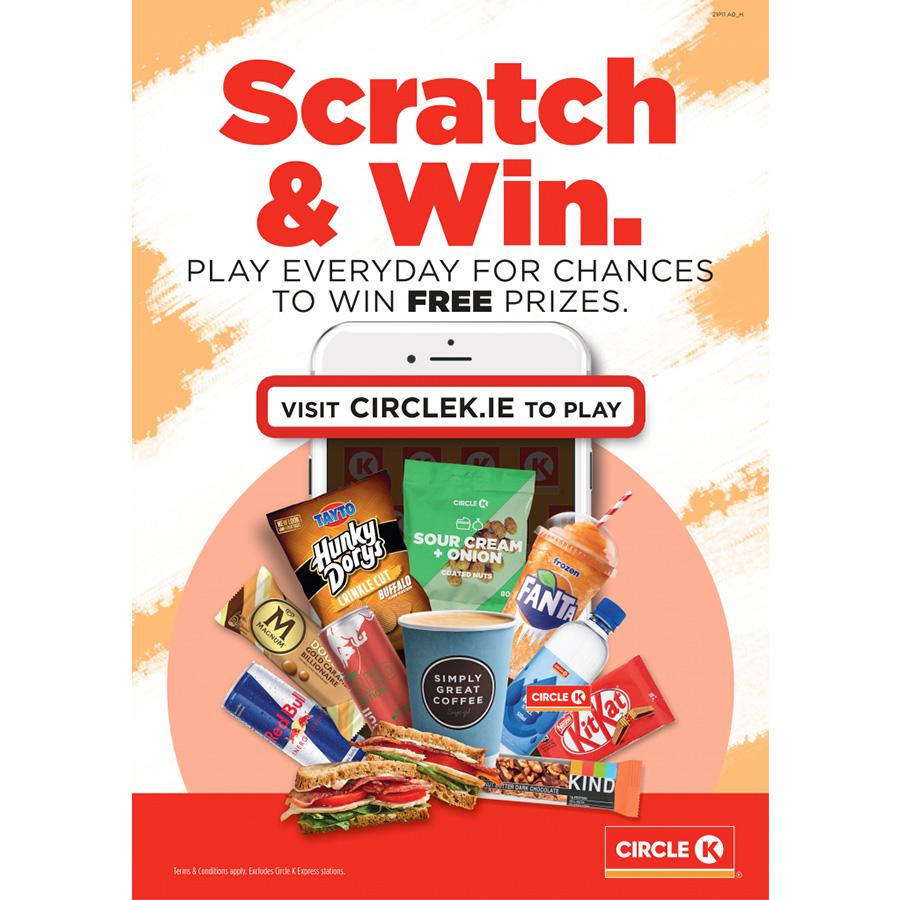 While our success in sport and lack of sunny days may not always show it, a new survey by Circle K, Ireland’s leading forecourt and convenience retailer, reveals that 30% of Irish people believe we’re the luckiest country in the world.

The survey was carried out to celebrate the return of Circle K’s popular free virtual game Scratch and Win, which is back until the end of April. With over 120,000 winners already and more than 200,000 fantastic prizes still left to be won, including five PlayStation®5 consoles courtesy of Red Bull, many players won’t even need the luck of the Irish to walk away with some great swag.

Despite what others may choose to believe, it turns out we Irish are not a nation of begrudgers after all! In fact, the Circle K survey revealed that a massive 87% of respondents feel either happy or very happy for others when they get lucky or win something. And, while a Google search for the word Begrudgery lists Ireland and Irish within some of the top search suggestions, only less than 2% of us are not happy to hear about the good fortune of others. Take that Google!

The luck of the Corkonians

With an impressive track record in lottery wins and Winning Streak appearances, it’s probably unsurprising that Corkonians believe they are the luckiest ducks in Ireland. A massive 77% of respondents from Cork consider themselves to be lucky, followed by Dubliners (67%) and people from Meath (50%).

The gift of good fortune

Whether it’s a lotto win or finding a spare €1 in your back pocket, half of all respondents (53%) feel they are lucky in life. Of the 505 adults surveyed by Circle K, 46% believe they are particularly lucky in love while a further 16% feel financial luck is on their side. When it comes to finding a dream job, over one fifth (23%) frequently or always think success is down to luck rather than hard work.

May the odds be always in your favour

Unlike many of the public who feel generally lucky, over a quarter (26%) feel little or no hope that they will win a competition. Fortunately for them, consumers won’t need luck to clinch a prize playing Circle K’s Scratch and Win, as the odds of winning are always stacked in their favour. There are three chances to win a prize every day with lots up for grabs including free cups of Simply Great Coffee, Froster iced drinks, car washes as well as a selection of items from Circle K’s delicious in-store food range.

While many would say Ireland is a country full of charmers, 69% carry or wear lucky charms to bring them good fortune. Using lucky numbers is the method that 32% find success with and 26% scour their wardrobe to find a lucky piece of clothing.

8 in 10 (81%) admit that they believe in superstitions at least to some degree. Just over half (51%) think discovering a penny brings them good luck, followed by bird poo landing on them (48%). To rid themselves of any bad luck, a third (32%) throw a pinch of salt over their shoulder and would never walk under a ladder (52%), break a mirror (50%) or open an umbrella inside (40%).

With over 120,000 wins already and 200,000 prizes left to be won, it’s time for the Irish public to up their luck with Scratch and Win. All consumers have to do is visit the Circle K app or go online to scratch.circlek.one/ie and scratch three matching products on a virtual card to reveal a prize. Once players win a prize, it can be redeemed instantly at any Circle K store across Ireland, excluding Circle K Express sites 1.

As well as daily little wins, Circle K also has some amazing higher value prizes to giveaway every Saturday throughout the promotion including iPads, Circle K hampers, gift vouchers and a year’s worth of free Simply Great Coffee. Plus, once a day after every player’s three virtual cards are ‘scratched’, a bonus ‘slice ninja’ game, sponsored by Red Bull, will pop up that will give them the chance to slice virtual prize items. Each daily play of the bonus game will enter you into a draw to win one of five Red Bull hampers, which includes a highly coveted PlayStation®5 console.  Any gaming fan will know that the latest edition of Sony’s Playstation console is incredibly difficult to get your hands on right now, but for 5 players who choose to ‘slice’, their luck will soon change.

Eadaoin Keane, Senior Marketing Manager at Circle K Ireland said: ‘We won’t be ringing in St. Patrick’s Day in the traditional way again this year, but when celebrations are in full swing, many people travel to these shores hoping that ‘’the luck of the Irish’’ might rub off on them.

‘We conducted a fun survey to see how many people in Ireland believe that age old phrase to be true and found that a lot consider themselves lucky. But whether you might feel lucky or not, you don’t need any good luck to bag yourself a prize on Scratch and Win. By playing up to three times a day, you can make sure that some brilliant prizes are not left behind. This time, there are more prizes on offer than ever before, including 5 PlayStation®5 consoles, so what are you waiting for, go online and get scratching!’.

Survey of 505 Irish adults via Survey Monkey in March 2021